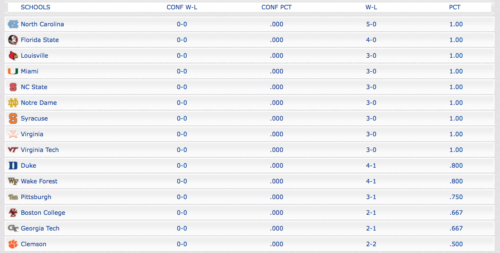 The above chart is actually wrong. It lists North Carolina with five wins but they only have four at the time of publishing this. A win again Chaminade would render the opening moot. Still, these are the official ACC standings from the conference website, so we’ll got with it.

The Blue Devils lost a 77-75 heartbreaker in the first test of the season against No. 7 Kansas. The Jayhawks are now 2-1 with a tough 103-99 loss to Indiana representing the only blemish so far.

Luke Kennard has been the star for the Blue Devils (4-1) so far. He led the team with 22 points, five rebounds, and five assists against Kansas and scored a team-high 24 points in a win over No. 21 Rhode Island. The sophomore has shot 55.2 percent from the floor and 87.5 percent at the free throw line while leading the team in scoring (18.2 PPG) and assists (3.6 APG).

Dwayne Bacon has been doing what everyone expected and leading the way with 17.5 points point game on 48 percent shooting. Stud freshman Johnathan Issac has put up 14.5 points and six rebounds per game.

The schedule should prove the get a bit tougher beginning with Temple on Thanksgiving day, and followed by games with Minnesota and George Washington.

Michael Young is off to an outstanding start to the season, earning ACC Player of the Week honors twice in as many weeks. The senior averaged 23.3 points, 7.3 rebounds, 2.0 assists and 1.0 blocks per game during a 2-1 start to Pitt’s first season under Kevin Stallings.

Young also made 21-of-23 shots at the foul line during a stretch of games that included a loss to SMU at Madison Square Garden and an exciting victory over Marquette in which Young scored 19 points during a second half comeback.

Get the Sabre Edge!